After high school, Kent Johnson joined the Auburn Community Theater in 1977 and it was there that he also began building sets and ultimately directing shows.  From 1980 through 1982 Kent and his wife Shelley acted in the Ft Wayne Civic Theater where he received an Anthony award for his role of Curly in Oklahoma!  Kent & Shelley returned to Auburn and founded Club Flamingo, a musical review theater they operated from 1983 through 1985.  In 1985, Shelley started teaching vocal music at DeKalb High School in Waterloo Indiana where Kent co-directed over 60 shows with her as well as being the Technical Director.  Since 2008, Kent has served as Vice President of the DeKalb Outdoor Theater where he oversees all aspects of the theater including booking the entertainment and overseeing the volunteer workers (as well as popping popcorn).  Kent, along with his wife Shelley, has received the Allen Graber Citizen of the Year Award (2012), Medal of Arts Award (2017), Indiana University Purdue University Ft Wayne (IPFW) Leadership Impact Award in Community Leadership (2018) and Indiana House of Representatives Recognition of Achievement House Resolution (2018). 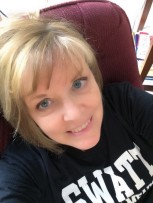 Mary Kay Clark began her love of play writing and directing when she was in 8th grade! She has been a director and playwright for 25 years starting at Novi Theatres (Michigan). There she founded the “little people players,” an acting group designed for 8-11 year olds and directed youth ages 8-18. She moved to southern Ohio where she directed and taught acting and makeup classes with Yellow Springs Kids Playhouse. Mary Kay moved back to her hometown 7 years ago and worked at Country Meadow Elementary where she built a theater program teaching students to be onstage as well as how to run the lights and sound and work the backstage. She also created a daily news and entertainment show, Hawk News, empowering students to write, record and edit each day. Some of her favorite scripts she has written and produced are Fractured Fairy Tales, a story of how a boy and a fairy rewrite fairy tales taking out the kissing, Sleeping Beauty Unplugged, where the past collides with the present and technology, and Beauty and the Beast Revisited, a fun parody of the original. Although she loves writing and directing, she is also familiar with performing having played roles such as Eulalie Mackecknie Shinn in Music Man and the Wicked Witch in Wizard of Oz. Mary Kay is excited to seek this new adventure with Excelsior Academy for the Performing Arts in Auburn.

Shelley Johnson received her BA Music from Indiana University where she was in the marching band – The Marching Hundred as well as the Singing Hoosiers.  Shelley taught elementary music along with high school band in Lagrange Indiana at Lakeland School Corporation before teaching middle school vocal music at DeKalb Middle School. Shelley was involved with the Auburn Community Theater where she held many roles including Guinevere in Camelot.  Shelley and her husband Kent acted in the Ft Wayne Civic Theater in the early 80’s holding a variety of roles including Grace in their production of Annie. Kent & Shelley returned to Auburn and founded Club Flamingo, a musical review theater they operated from 1983 through 1985.  In 1985, Shelley moved to DeKalb High School where she was director of Choral Music and oversaw the 4 time State Champion mixed show choir – Classic Connection, the 3 time State Champion women’s show choir – Sound Sensation and the State qualifying Jazz ensemble – The Dynamix.  Shelley co-directed over 60 theatrical performances with her husband Kent while at DeKalb as well as overseeing all of the costuming while there.  Currently, Shelley is a vocal music and theater teacher at Northrop High School in Ft. Wayne Indiana.

Alicia Smith has been dancing her whole life.  Through high school, she was very involved in the Patricia Krus School of Dance where she won numerous awards as a dancer.  Alicia was also a member of DeKalb High School’s show choir – Classic Connection where she was a featured performer her senior year.  In 2005 she became a full time instructor at the PK School of Dance and and in 2007, purchased the studio and renamed it Pure Dance.  From 2007 to 2015, Alicia was assistant director of the Lakeland High School Show choir where she created the staging and choreography as well as overseeing the costuming. Alicia has been on the Board of Directors for the DeKalb Outdoor Theater since 2007.  Since 2012, Alicia has been the event day coordinator and editor of communications for the Ft Wayne Dancesport Ballroom Special Olympics.  Alicia Smith received her BA in Psychology from IPFW

This site uses Akismet to reduce spam. Learn how your comment data is processed.